Following on from the success of Paddock to Plate, the Orange Regional Museum engaged us to design their follow-up exhibition All in a Day’s Work.

This temporary exhibition featured 78 evocative black and white photographs from the Central Western Daily’s extensive collection of negatives. The exhibition centred around the working lives of the Orange community from the 1950s to the early 1970s.

We were inspired to create a simple backdrop for the striking black and white photographs, allowing them to be viewed at both large and small scale. Rather than following the conventional path of mounting the exhibition onto the wall, we decided to create an unexpected visitor experience by displaying the photos on a series of timber benches.

Two large projection screens were the central feature of the exhibition, placed prominently in the centre of the museum space. The benches radiated around the screens in themed sections, with the photographic reprints mounted on angled display plinths on top.
Large banners on the perimeter walls featured a hero image for each theme. The stylish graphics showed off the favoured colours of the era: the mint green of factory lights; the rich orange of old bricks and the pale pink of many fixtures and fittings. These colours contrasted beautifully with the predominantly black and white aesthetic.

Two satellite displays complemented the main exhibition. The first featured objects collected by the Orange and District Historical Society. The second display highlighted the work involved in developing negatives, so we displayed the photographic equipment in a stylised dark room. The equipment in arranged in task sequence, giving a sense of the process in the days before digital photography.

The exhibition design of All in a Day’s Work operated on two levels. The experience began with a dramatic impression on entry with the giant screens dominating the soaring architecture of the museum space. Moving through the exhibition, the visitor experience became more intimate. The bench displays allowed individual paths and close viewing of the historic images. 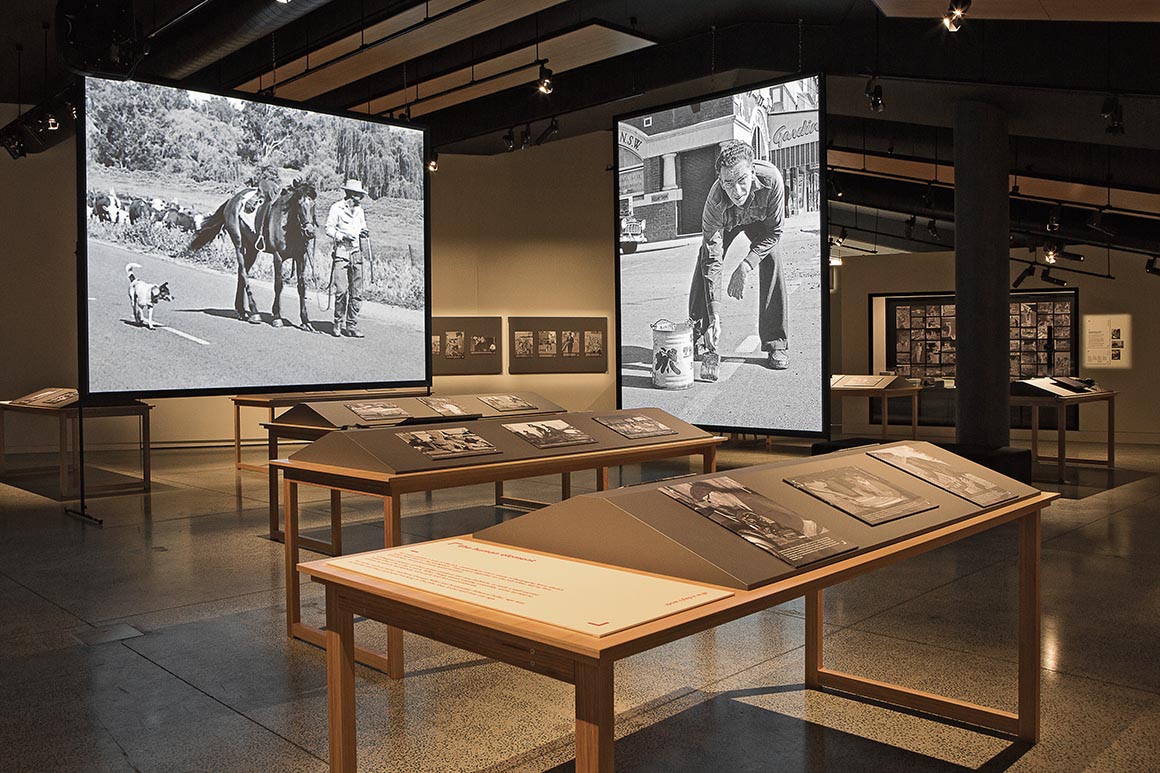