To commemorate the 50th anniversary of the moon landing, the Powerhouse Museum mounted an exhibition exploring the Apollo 11 mission. The exhibition opened in June 2019.

The chosen exhibition space presented an interesting design challenge. The area included an open mezzanine, a corridor and the tight space underneath one of the escalators. Generally, this area is used for very small temporary exhibitions. In contrast, Apollo 11 contained over 200 objects (including a full-size space capsule) and was a major drawcard due to the significant anniversary.

Our aim was to define the corridor space and present it as a dedicated gallery. We placed the objects and themes leading up to the moon landing out on the mezzanine, and focused on Apollo 11 within the smaller space. We used a strong, simple language of form and colour to create a cohesive and evocative exhibition for visitors to recognise and respond to.

We designed a series of walls around the existing columns to demarcate the exhibition and break it into discrete areas. The colours used echo the changing tones of the sky on the journey from Earth to the moon.  We chose a deep blue-black for the walls; the colour of deep space. Each theme then had an associated lighter blue for the cavities, showcase bases and graphics, representing incursions of Earth’s occupants into space. The base plinths were a silver finish, symbolising the ground-breaking technology on display.

A key facet of the design was the notion of elements slotting together, in a nod to the mechanical and engineering work involved in designing spacecraft. Showcases slotted precisely into cavities; a floor plinth appeared to have been pulled out of its place in the opposite wall. In plan, the design seemed capable of being folded in on itself and packed away like a puzzle into a much smaller form.

Out on the adjacent mezzanine, the colours and forms were used in an introductory section exploring the Space Race. A custom viewing platform for the Mercury capsule allowed visitors to peer inside the cramped cockpit.

The exhibition completely transformed the area and engaged visitors. The effect was sleek, evocative and immersive; a worthy tribute to this key world event. 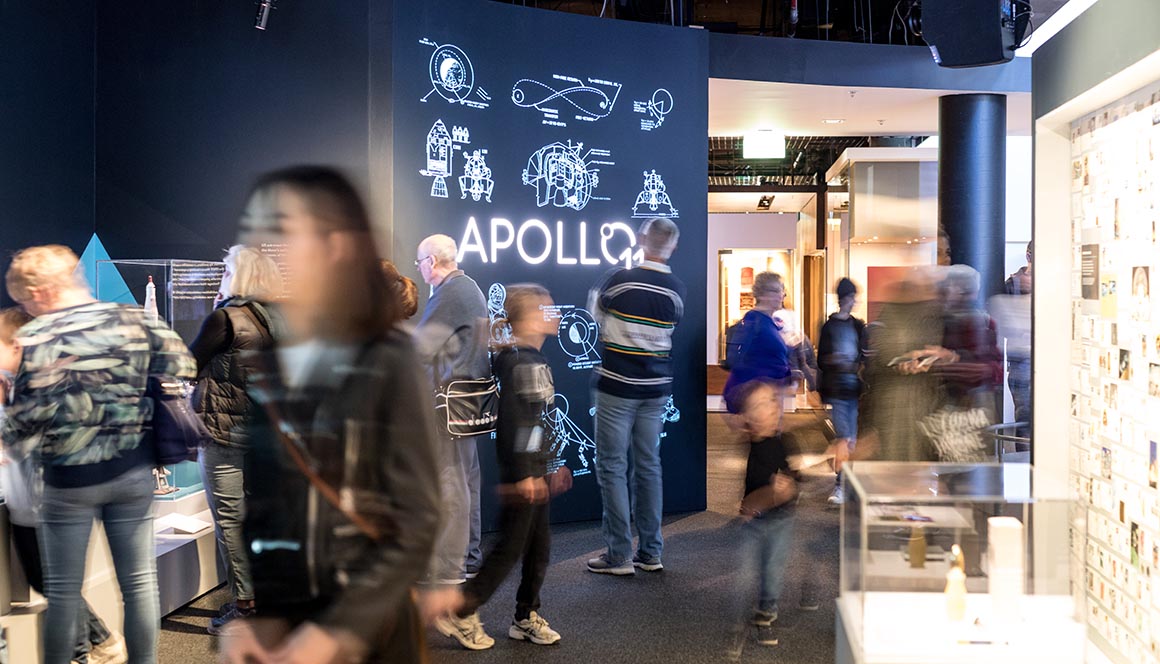